For many years I have got by with using, the almost Woodturners Standard Light, the "Angle Poise Lamp" and over the years have got through a number of these as the Plastic Parts wilt under the residue from Finishes and Polishes, so when the current Lamp required another temporary repair job I decided to re-think my whole Lighting Arrangement around the Lathe.

In a previous Hints & Tips I described a Fan Unit for suppressing the Dust immediately above the Lathe and this proved to work very well but I thought I could now re-visit this area and make a Light/Fan Box to give a better Down Draught as well as a better  overall Lighting around the business end of the Lathe.

At the same time I built a Flexible Lighting Unit to replace the Old Angle Poise  and a Mobile Light Unit for those one off awkward situations that always crop up regardless of how well your system is thought out.

All the Lighting Systems were designed around Low Voltage [12Vac] Halogen Lights as these are Small for the amount of Light they give off, are available with various Angles of Beam and, providing the correct Transformer Rating is used, come in 10, 20, 35, 50 and 75 Watt rating.

A 50 Watt Lamp has the same Light Intensity as a 150 Watt PAR Reflector and therefore is possibly the maximum you would need to use.

I in fact designed the Light Box for use with 5 x 20 Watt 36° Beam Lamps on a 105VA Transformer and each of the Lathe Flexible Lights use a single 50 Watt 24° Beam Lamp on a 65VA Transformer, although it would be alright to use the 20 Watt Lamps if required.

I will start with the Fan/Light Box as this entailed a total re-think as to how I lit the whole Workshop Area in respect of Normal Lighting and Concentrated Lighting for the Lathe, my original set up used a 5ft Fluorescent Tube running parallel with the Lathe but at approximately 11:00 to the Centre Line and a similar Tube behind me, so I was always working in my own shadow.

I decided to turn both these Light Fittings through 90° and place them at either end of the Lathe, in effect this now meant I had a Main Light 1/3rd in from each end of the Workshop, this left the area above the Lathe free for the Fan/Light Box.

This also gave me Light if I use the Lathe with the Head at 90° to the Bed, which is not that often, but on occasions it will be required.

In the picture above you can just see the Fluorescent Tube to the left of the unit, the Box itself is mounted above the Lathe at a height low enough to maximise the benefit of the Fans and Light but not so low that you hit your Head, when using your Respirator, on it.

The centerline of the centre Light is positioned approximately 50mm forward of the Lathe centerline and in line with where a typical item would be mounted on the Lathe.

As already mentioned the Lighting is via 12V Halogen Lamps and these were part of a Eyeball Downlight Kit purchased for a few £'s [or a few more $'s] at the local DIY Store and comprised of 5 Lamp Holders and the Transformer, also included were the Support Spring Clips for the Lamp Holders but these were not used.

The 2 Fans are 120mm [actually they are 110mm] Cabinet Cooling Fans with 240V Motors, the particular ones I used gave an Air Volume of 80 CFM each, and came from Maplin [UK Electronics Store similar to Radioshack in US] [Maplin Part N° WY08J].

You will also require a couple of Switches, a Terminal Box and all the necessary bits and pieces like Grommets, Cable, Cable Ties and Terminals. 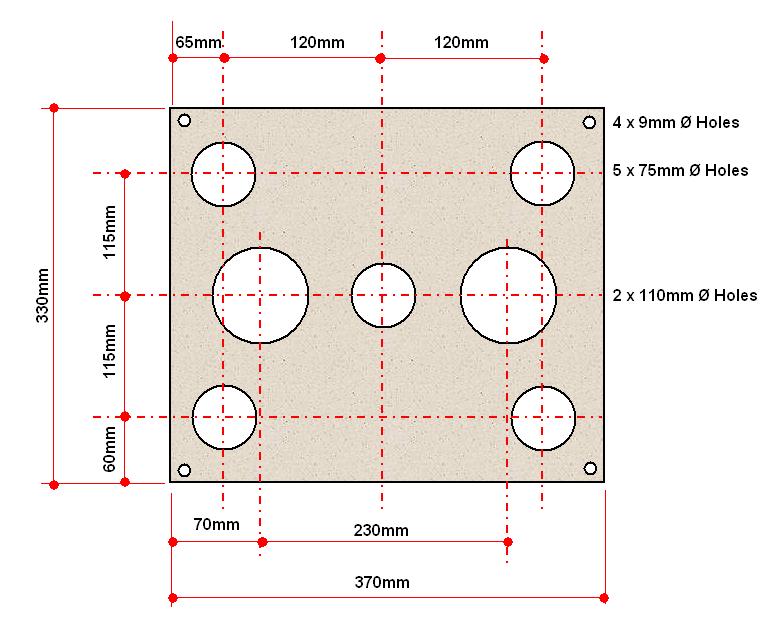 To start with you will require two pieces of Board, I used MDF, one for fixing the Lamps and Fans in and one the same size as the Top Plate generally dimensioned as detailed above.

The Holes for the Lights and Fans were to suit the Items I had and you will need to determine whether these are suitable for your particular choice of Lights and Fans.

I cut all the large Holes with a Jig Saw and finished off with a Drum Sander in the Pillar Drill, the four holes in each Corner are for the Pillars that form the Box with Open Sides.

The Lights are inserted and instead of the Spring Clips supplied I drilled through the Lamp Holder Flange [3 holes] and screwed them in place, make sure they are in the right configuration as the Eyeball Adjustment is only on one axis and they need to point towards the Centre of the base board.

The Fans are Screwed to the back of the Fan Openings using Wood Screws or similar and the Fan Guards fixed to the Air Outlet side of the Baseboard.

The Switch Box should now be attached to the baseboard and all the Wiring carried out with the Transformer located in a suitable position away from any contact with the Lights or restricting the Air Flow. 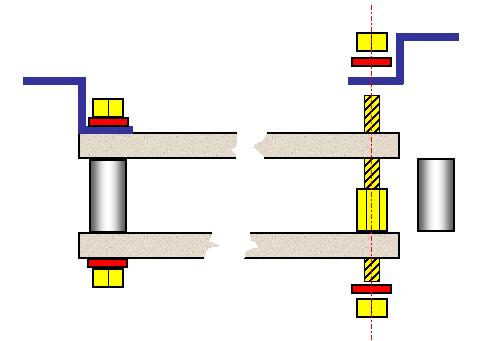 To make the "Box" form required, with open sides to allow the Air to enter the Fans and also act as ventilation for the Lamps, you use four corner pillars as shown.

First you fix an M8 Long Nut on the inside of the Base Board with a suitable Screw, into the Long Nut you now screw a length of M8 Screwed Rod.

Now you require 4 Pillars such as Steel Tube or Square Section of say 25mm Square or Round, that will sit over the long Nut/Screwed Rod. 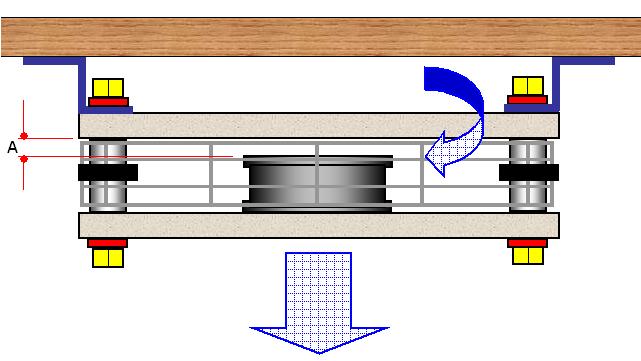 The height of the Pillars will have to be determined, this will be dependant on dimension "A" in the sketch above.

The Fan requires a Free Air Space around it equal to the Surface Area of the Fan if the full Air Flow is to be maintained, for the 110mm Ø Fan I have used this will equal 9500mm², and the circumference of the 110mm Fan = 345mm.

You then need to make some support Brackets, if your Ceiling like mine is sloping then these will be different lengths front and back, which are placed over the protruding Screwed Rod and with a nut and washer the whole assembly is clamped together.

I put a guard around 3 sides of  the Box using panels of Square Wire Mesh fixed with Cable Ties around the Pillars, and for the Front Panel I used some Aluminum Sheet with the Switch Box set into it. 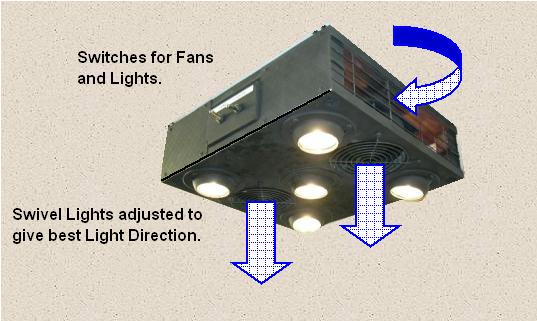 The Fan/Light Box cost me no more than £50 [$70] and I believe it is a worthwhile investment as I have the equivalent Lighting of about 300 Watt of Spot Lights that gives a very good Lighting level at and around the Lathe plus a good downward flow of Air that keeps the Dust away from the Breathing Tubes and therefore out of the Respirator [Filters now last longer] but more importantly my Lungs.

In the sketch above I indicate that as an option you could in fact Duct the Air into the Box rather than take Air from the Workshop, this is something I intend to do at a later date when I replace the Workshop Roof.

Article on Dust and the Lathe.

The first time I needed to repair my Lathe Light after I replaced the previous Angle Poise Lamp I was determined to find a solution to the problem and I carried around various ideas in my head for some time. 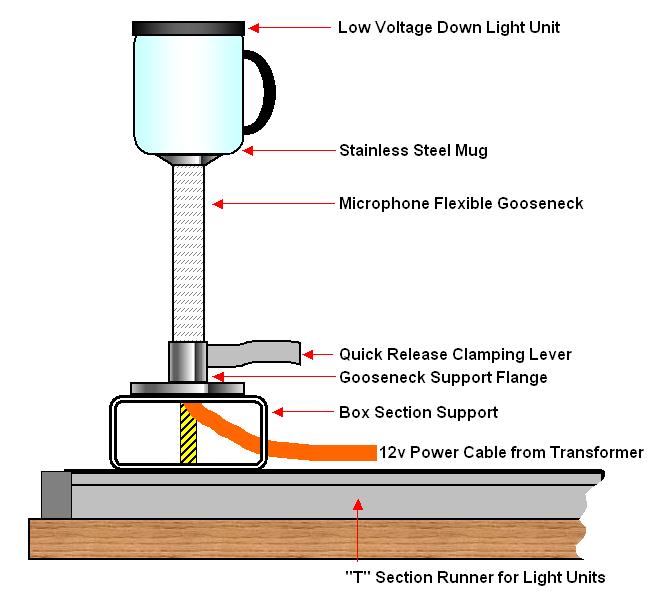 The two Lights are each fixed to a Support Bracket made from 50mm x 25mm Box Section by attaching the Gooseneck Support Flange to one end and drilling through the centre for the Cable, at the other end a hole is drilled to accommodate the quick release mechanism.

These Brackets are supported off of and run on a "T" Track made from two lengths [500mm] of 25mm "T" Steel attached at each end to an Angle Bracket used to screw the runner to a shelf behind the Lathe.

In the picture below you can clearly see the arrangement for adjustment and support, in the top left of the picture you have the Switch Box that switches on the power to the two transformers which are accommodated in a boxed off section just below this box which has an open end protected by a grille for ventilation.

The Portable Light enables me to have a Light Source anywhere around the Workshop and is basically the same as the Light System described above but with a Magnetic Base in place of the Bracket support.

The Magnet was taken from an old HiFi Speaker which was then bolted to a small section of the 50mm x 25mm Box Section, by drilling a hole in the central boss, which appears to be Mild Steel, of the Magnet which is a feature of this type of Magnet and then fit this with a Gooseneck, here I used the 330mm [13"] version as the reach required would normally be quite short.