Any session in the Workshop produces an endless amount of Rubbish, used Abrasives, Paper Towels, Steel Wool etc. etc. and with Space now very much at a premium the days of my old Dustbin [Trash Can] were coming to an end and I needed a solution that would save me space.

I had for some time used Rubble Bags, as opposed to the thinner and less durable Black Rubbish Bags, for the more Cumbersome Waste but not on a permanent basis.

So I decided to use this type of Bag supported in a frame in a convenient space to the Lathe so that I could as required "Toss" any Rubbish / Waste in without taking up too much space or cluttering up the Floor of the Workshop.

The Frame to support the Bag is made from a length of Perforated Angle [Dexion Type] although any lightweight angle will do, cut and fixed to make a rectangular frame generally as shown above.

If you are using a single length you mark of from one end and draw a line at 40cm [15"] and cut through one of the Flanges only, then from this cut mark a line at 25cm [11"] and repeat the cut, continue with a cut at 40cm [15"] which should then leave you with a further 25cm [11"] to the end, you are now ready to bend the Frame to the required shape.

Once this is done you will need to either Weld or Bolt the Frame together at the open Corner and then if required give it a coating of paint.

I have for some time been making my own Wax Polishing Sticks whether they are from Pure Beeswax, Carnauba or a Mix of both.

The raw material is much cheaper than the Branded Sticks and comes in many forms, Blocks, Flakes or Pellets and is available from either Specialist Woodfinish Suppliers or Beeswax from your local Bee Keeper at a fraction of the cost.

I prefer to use a Pure Carnauba Stick on the majority of my Work but I also occasionally use a Beeswax Stick or a 70% Carnauba to 30% Beeswax Stick although this mix may not be to your liking the beauty is that you can experiment without incurring to much cost.

Melting the Wax is fairly straight forward and I use an old Heavy Duty Aluminum Saucepan over a Low Heat from a Camping Gas Burner, as SIWMBO is not so keen on me using the Kitchen Stove.

Once melted, and mixed when applicable, the Wax is poured into a shallow Non-Stick Baking Tin which in my case measures 27cm x 17.5cm x 3cm [10" x 7" x 1¼"], it is preferable to have a Tray with a slight slope / taper to the sides as this makes it easier to remove the Wax slab when the time comes. 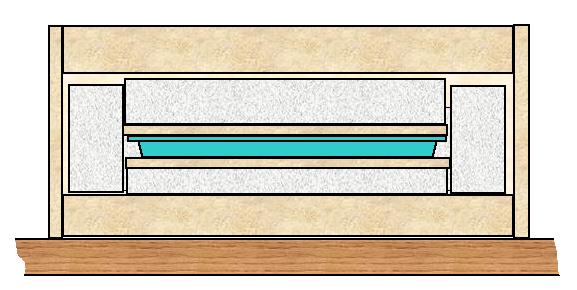 When leaving the Wax to set you will need to control the rate of Cooling otherwise you can end up with a Stick that is distorted and brittle, for this I made a simple box into which I could fit the Tray of freshly poured Wax surrounded by 50mm [2"] of Polystyrene on all sides.

The Tray sits on a piece of Hardboard or Ply with a piece also on top of the Tray as shown.

Left like this, overnight, you will achieve a slow controlled set of the Wax slab that will produce a constant density and even texture, this produces a quality Wax Stick at a tenth of the Cost of the Branded Type.

Any broken Sticks or leftovers can be put to one side and melted down with the next batch although that may be some time away as my batch of 18 lasts me about 3 years.

The Tray I have used requires about 500g [1.1lb] of Wax to make the 18 Sticks described above. 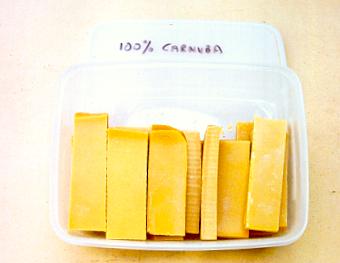 These I store in a Plastic Food Container marked with the Type of Wax and Mix.

In the article above I described how I made my own Wax Polishing Sticks, since I wrote that article I have been carrying out some experiments with Abrasives added to the basic formula of Carnauba and Beeswax.

This Article describes the new Mould and Hardening Box I made and the mix for these new Sticks.

Although you could use the original concept to cast these Sticks I decided on making a Single Stick Mould which could be housed in a small Insulated Box for Setting.

For the Mould I used a length of Lightweight Mild Steel Channel with the ends sealed by Silver Soldering on a MS Plate at each end, this Channel is slightly "Splayed" out so that the Wax Stick can be removed from the Mould without any trouble.

Make the End Plates slightly larger than the end of the Channel and this will ensure an Air Gap around the Mould when in the Insulated Box, this will make sure the Mould is not in direct contact with the Insulation which can melt at or near the temperature of the Mould.

As with the Plain Wax Sticks it is important to allow the Stick to Cool and  Set Slowly and for this I made a simple Box from a High Density Insulation [Typically Styrofoam] but any Rigid Insulation will do, such as Polystyrene or Rockwall.

For the Softer Woods I produce a Stick made from 70% Carnauba and 30% Beeswax melted together and then add sufficient Pumice Powder to form a Mix that will just about Pour, I use a Spoon to ladle in the Pumice and Stir the Mix over a low heat until the contents of a Spoonful will just fall of the Spoon.

This is then Spooned/Poured into the Mould.

For the Harder Woods I have found a 100% Carnauba Base is preferable, following the same procedure as above.

You will soon know if the Mix is not correct as the Stick will clearly show a distinct layering of the Pumice [Bottom] and the Wax [Top], if this is the case simply re-melt and add more Pumice and then re-cast the Stick.

Results from both Formulae of Stick are as good as the Shop bought item at a fraction of the cost and for that reason I tend to use them more than I would have in the past.

So do carry out your own experiments to find the mix that suits your needs the best, as for me I intend to do the same but with Rottenstone, which is a Finer Abrasive, in place of the Pumice next.